Air India!
Woes and more woes! – for a company with dedication and passion brimming at the edge of its days.

I think as an Indian some of us are eager to fly the national carrier regardless of what it may be, regardless of the fact that it has far more problems that meet the eye. But does the intent take you through? Again the question is not if Jet Airways or Indigo is not Indian. That’s a demand analysis. They are not our national carrier, they are carriers from our nation, let’s not get into that bit for this discussion.

How many young 25 year olds would actually know that AirIndia is the brainchild of one of the country’s pioneering minds JRD Tata!
Err even many 40 year olds are not aware of this. Then, how many of us are aware of the maharaja? Where is he these days? He is not on my boarding pass, he is not on the pursers tie-pin, he is not there on the wing of the flight I fly, not embellished in the decor, he is nowhere! 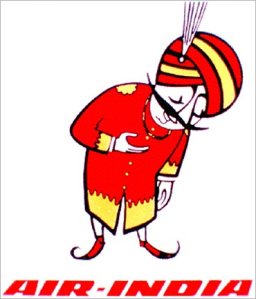 Let’s talk brand for a bit! One of the biggest brand icons of India is the Air India Maharaja one of those landmark works done way back in 1946, when Bobby Kooka as Air India’s Commercial Director and Umesh Rao, an artist from the iconic J Walter Thompson or HTA as it used to be known. In the early 80’s Air India was one of the top three airlines on service, food and ambience. Seriously we were a hit with the expat love and western awe, before they started seeing Rajasthan and Udaipur and Slum Dog Millionaire. In fact the Indian railways started palace on wheels some fifteen years ago replicating a maharaja experience, when there was a much accomplished version in history in the same India – Air India and its now missing Maharaja! BTW looks like they lost the Maharaja experience precisely when they merged Indian and Air India around 2007 to create a more hole –istic new Brand. And some where in early 2015 sink it to a new hipster young Maharaja – talk about Brand faux pas. 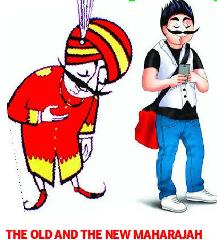 BTW even he is missing, or may be he was designed only for Air India One!

But let’s pull back a little, “What an idea Sirji!” You are a guest in any airline but you are a Maharaja only on AirIndia! Brilliant, the exact recipe for some fantastic work and imagine what today’s talent would have done with this idea! Soar through the skies! Quite literally!

And then.. Cut to today – the young Indian, will never understand the reason on why no one wants to travel Air India. A typical example of a brand that had all the right branding aspects but still failed. What an exciting account to handle from an Ad agency point of view, this brand had the right mix of things for a Lion at Cannes any day.
If you have read this far, then may be this could be interesting. Let’s debate if you wish.

I will give you 5 reasons that make Air India work for anyone today!
1) Did you know it’s still home on the air for any Indian travelling alone or with kids or the aged
2) It’s the most accommodative airline when it comes to guiding its passengers through transit across UK Or US – BTW most of the U.S. And UK AI flights are full of older aunties and uncles travelling to see their grand children.
3) It’s got one of the most experienced task force of captains and inflight people – yes the grey hair has more experience than what the mini skirt can ever match.

4) Indians are probably after the Chinese the most spread out across the world than most races, so I guess there is one AirIndia flying close to you to somewhere in the world.
5) In the event of any of our NRI’s like me stranded outside in any other country there will be one Air India coming for you
So why can’t we be brand loyal?

We are loyal to so many things, forgetfulness – a national incident we remember for just 10 days, forgiving – a terrorist we will forgive and move on, we love to go through pot holed roads every day and never yearn for change for the better, why can’t we be loyal to this cause?
So imagine if every Indian travelling the world takes only an Air India or choose Air India first! Well the Malaysians and the Singaporeans do it all the time let alone all the Arabs and the Brits and the Germans! They all fly their national carrier, why can’t we?

Oops! I get it! We do not have well maintained birds compared to the rest of the world.

We broke it in the first place! Remember?

So, fix your next flight Damn it!
Be a Maharaja today! Give the AirIndia Maharaja the real deal because only every Indian can do it. It’s not a brand miracle anymore. It’s a country mantra. Let’s stop singing patriotic songs; let’s stop tearing up when it comes to the national flag and when Shah Rukh holds the flag up in the next big hit musical. Let’s act. Let’s create the next big “Make In India” possible. Or even the next big “fly Air India challenge”, but lets do it. Try to choose Air India first before you move to the next best option. It’s a small price you pay for putting the carrier back to the top 3 airlines in the world. Then the world will follow suit.

PS – In case you thought I am writing this after a splendid flight on an AirIndia AI 346 on June 24th, nope,  I was taxied back after a full run way for a glitch in the “left phalangee” (ref friends). Sat in a hot seat 11A in the sun; once the door was open, the sun comes in only on that one seat with the tech teams going in and out. Had hot lunch in my hot seat on ground, and then precisely around the time I was supposed to land in Singapore I took off from Chennai. But I am not upset, I was glad I was on an Air India, because it is “My Palace in the skies”, because I have believed in it for 35 years, because the staff try harder than any other airline I have seen, otherwise I would have thrown the worlds biggest tantrum!

The Author is the Co-founder of BLU, a Singapore based Brand and Communication Consultancy and a certified Personal Brand Strategist. She writes what touches her and what inspires her or something that is relevant to be taken note off. She focuses on Brands both Products and People. All views are her own and does not represent any organisation.
Www. Anitapradeep.com
Www.bluinsights.com

2 thoughts on “Will the real Maharaja please stand up!”